Harley-Davidson has made impressive strides in electric vehicle development, and not just for its LiveWire electric motorcycle halo product. The company’s electric scooter prototype is positioned to be a much more affordable and accessible electric two-wheeler, and here is why it is needed now more than ever.

As much as I love the Harley-Davidson LiveWire, especially after doing an in-depth review of it this Spring, I think we can all agree that its $30k price tag keeps it out of reach for most riders.

And that’s ok – it was never meant to be a big seller. Rather, it was designed to demonstrate H-D’s ability to build a high quality electric motorcycle. Which it did in spades.

The one that I believe is needed now more than ever is the upcoming Harley-Davidson electric scooter.

While we don’t yet know the full specs of the Harley-Davidson electric scooter, some things are obvious.

First, it follows the electric moped/mini-bike styling trend that we’ve seen explode in popularity lately. If you take a look at e-bikes like the Juiced Scorpion or the Super73 line of e-bikes, you’ll see what I mean. These are fun, retro-styled electric two-wheelers that combine utility with recreation. Sure, you can ride it to work or the grocery store, but you can also enjoy the cruise as well.

Second, the scooter is a lot more approachable than a big motorcycle like the LiveWire. We’re probably looking at something like a 3-5 kW motor (versus the 78 kW motor in the LiveWire). No one knows yet what top speed that will translate to, but we can make some guesses. On the one hand, Harley-Davidson might try to keep it in moped territory, which would mean a 30 mph (51 km/h) top speed and would keep it legal in many states without a motorcycle license. On the other hand, a motor in that power range could easily handle 45-50 mph (72-80 km/h) speeds, so we could be looking at a faster, more capable electric scooter that can practically (and safely) operate on faster roads. Or there could be two versions to appeal to two different markets.

Lastly, it’s going to be cheaper. How cheap? I have no idea, but it’s not going to cost $30k like the LiveWire. I’d really love to see H-D get it under $5,000, though I’m not sure if that is realistic. They are a premium brand after all. But even at that price, there could still be plenty of buyer’s lining up for the scooter. If you take a look at companies like ONYX or Huck Cycles, both build multiple electric moped models in the 30-60 mph (50-80 km/h) range, and both have prices that float north of $4,250 to $4,750 after taxes and shipping. The last thing they have in common is that they are both drowning in demand. Huck Cycles is fairly new and yet they keep walking their lead times back, now reaching around 3 months. ONYX is running more than 3 months of lead time right now, and has been for almost 2 years. They even opened a second factory to build bikes and still haven’t been able to keep up with demand.

So if you thought people aren’t will to pay seemingly high prices for fast, retro-styled electric mopeds and minibikes, then think again. And even if Harley’s offering comes in with a bit higher price tag, they’ll have the benefit of not being a new startup. ONYX and Huck Cycles offer warranties, but that relies on customers believing the company will survive long enough to honor the warranty. And each has a single location, meaning service and support will never match watch H-D can offer with its world-wide dealer network. Oh yea, and you’ll actually be able to walk in and buy an H-D electric scooter, presumably without a 3-month wait.

So between the popularity of these bikes, the increased accessibility and draw for people who wouldn’t normally consider themselves “motorcycle people” and the fact that Americans are proving they’ll pay high prices for these bikes, the H-D electric scooter seems to have a very fertile market opportunity ahead of it. 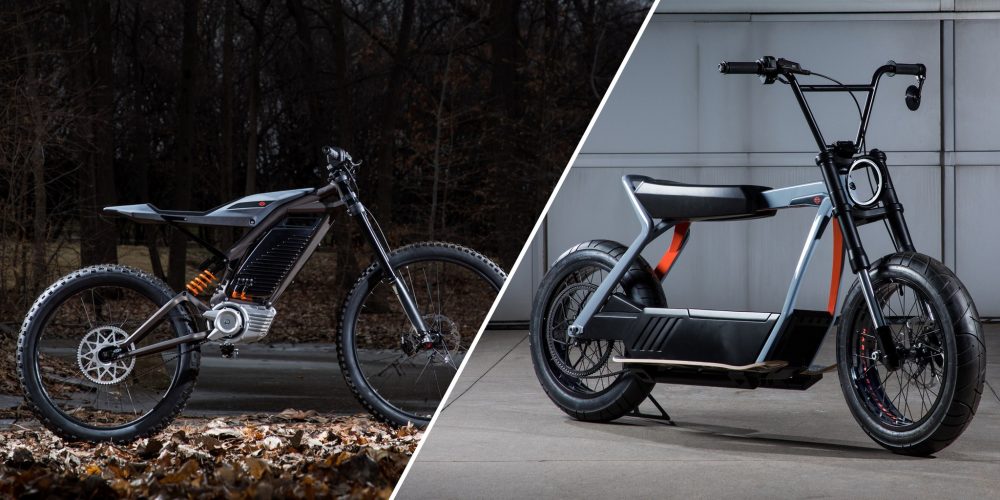 And that’s before you consider the COVID19 pandemic and financial crisis it spawned.

As Rideapart recently reported, H-D is delaying some of its gas-motorcycle launches due to disruptions from the pandemic. On top of that, many people are struggling financially. A $20k bike was a much easier sell 4 months ago. Now, think again.

But if someone who was looking for an urban motorbike now wants to save some cash, a vehicle like the H-D electric scooter might just be perfect. It’s certainly going to be less expensive than a lot of larger gas motorcycles (though admittedly won’t have the range, speed or utility of those motorcycles). For urban commuters though, it could be a much more sensible purchase than a big gas-powered motorcycle. Electric bikes cost pennies per month to operate. Insurance is usually cheaper and sometimes not even required, depending on the state and the moped vs motorcycle classification.

With customers tightening their belts and looking for more affordable ways to get around, these types of electric scooters can be a great solution.

So when is the Harley-Davidson electric scooter coming? No one knows. To be honest, I’m not sure the company even knows right now. H-D had projected the scooter’s release to be in either 2021 or 2022, but that was before the world went through a mini-meltdown. While I really hope this isn’t the case, I don’t think we can be surprised if that timeline gets pushed back.

But if any Harley-Davidson execs are reading, I hope they’ll listen to me on this. I think the H-D scooter’s timeline should be accelerated. If you guys can take advantage of the market’s need right now and land this scooter successfully, this could be the beginning of a new chapter for H-D and a chance to significantly widen the H-D target market. I’m a young, urban commuter – exactly the type of customer you need to be winning over – and I’d ride the hell out of this thing.

So if you’re listening Milwaukee, let’s make it happen.

Why Renewable Electricity Powers Decarbonization — and Pays Off