I remembered the other day that I made a New Year’s resolution to decrease our electricity use by 10%. I pretty much forgot all my resolutions in the spring (!), so now it’s cram time. Here’s what I learned this past week as I tried to figure out the easiest way to shave 10% off of our electric use.

The bills show we’ve been using around 800 kWh for each of the last few months. That seemed high to me, since we have a modest house, small family, and few big electric appliances. I figured 10% should be very doable. I’d start by finding out how much we’re using at different times to see if that pointed to some low-hanging fruit.

We don’t have a digital meter, so I had to go out to the meter and measure how fast the little wheel is spinning. Do you know what I’m talking about? Our meter looks like this.

The meter reader reads the five dials on top each month to figure out how much was used in the past month. You can also check it each day to see how much you use each day. In my case, it goes up between 20 and 30 kWh each day. But that doesn’t really help figure out where the electricity is going. The spinning wheel is more helpful for that.

The “7.2 Kh” in the corner means that the wheel does a full rotation for every 7.2 watt-hours used. If you time the rotations you can figure out how much power is being used. For example, if it takes ten seconds for one rotation, then you are getting 7.2 watt-hours in 10 seconds, or 7.2 * 6 * 60 watt-hours in one hour, which means 2592 watts is being used. (1) That could mean you have some lights on and someone is running a hair dryer, for example.

Take a look at this set of short videos I made of our meter to give you an idea of what this looks like.

I was doing this in the middle of the day, so there wasn’t much on except the dining room light, where my daughter was “in school”. One rotation took about 45 seconds, so about 576 watts. That seems like a lot of electricity for doing nothing. So I turned off circuit breakers one by one to see where the power use was happening. It wasn’t until I got to circuit breaker #12 that I saw the wheel really slow down, to 62 seconds per rotation or about 418 watts. What are the 160 watts behind circuit breaker #12? 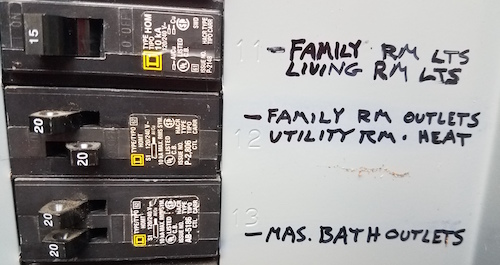 Turning off circuit breaker 12 led to a big drop in power use.

“FAMILY RM OUTLETS. UTILITY RM. HEAT”. Hmm. There’s nothing much plugged in in the family room, we don’t have a utility room, and the heat is off. Moving on, I continued turning off the circuit breakers, leaving the dining room light to last. There were only small changes, so when just the dining room light breaker was left, the rotation speed was still about 73 seconds, or 355 watts. Yikes, that is one power-hungry light fixture. Once that was turned off the wheel stopped spinning.

The dining room light, shown below, has fourteen little halogen bulbs, each drawing up to 40 watts. I had replaced a few with LEDs when they burned out, but we rarely used this light until recently. Now with “distance learning” it’s used for much of the day. Time to replace the rest of the bulbs! 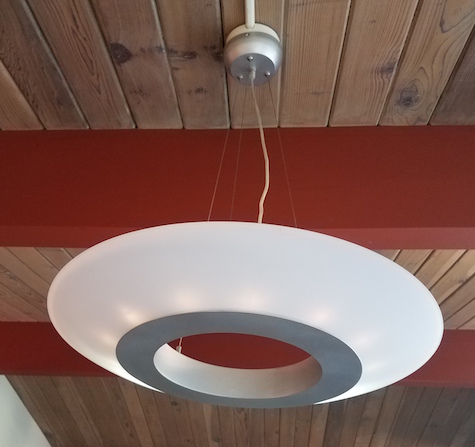 This flying-saucer-like light fixture has 14 small G9 halogen bulbs, each 40 watts. Fortunately they now make LED equivalents that are only 4 watts.

Now I just had to figure out the mystery with circuit breaker #12. I unplugged everything in the family room, but it made no difference. What was the “utility room”? The water heater closet in the garage? I turned off that switch, but it again no difference. Could it be the hall closet with the ethernet panel and radiant heat manifold? The only thing plugged in there are the modem and router, so I unplugged those but it only saved about 20 watts. I opted to just leave that circuit breaker off and if we didn’t notice, so much the better.

So I got the daytime use down a bit, but it wasn’t that high to start with. How could our bill be so high? The house supposedly sees an average of 1111 watts, and given that night use is probably more like 300 watts (3), that meant the daytime average was around 1500 watts. But I was barely scratching 600. We do have an electric car, and the charger’s dashboard shows it’s been using about 130 kWh per month. Subtracting that leaves a daily average of 931 watts, or 1246 daytime watts. Where is that coming from? We don’t run the dryer or use the oven that much.

Just for fun, I turned on every light in the house — indoor lights, outdoor lights, closet lights. That got the wheel spinning like crazy, just 4.3 seconds per rotation for a total of over 6000 watts. So at least it was possible to get a high number. But in reality we don’t use that many lights and the normal-shaped bulbs we’d replaced long ago with LEDs.

It made me realize that evenings are probably going to use a lot more power than midday. Would they make up for the difference? I measured during dinner, with kitchen lights and the range hood on, and saw the wheel spinning once every 20 seconds, or about 1300 watts. That was getting there. Later, with a few more lights and the TV on, the wheel was rotating every 14 seconds, or about 1850 watts. Dishwasher on? 2250 watts were being used.

With that in mind, how can I drop our use by 10%? I changed the bulbs in the dining room light fixture to LEDs. It went from using about 350 watts to using only about 20. That was an easy win. I also changed the dishwasher to do the “Energy Saver Dry”, which is just a drip dry. The manual says to be sure there is rinse-aid. I tried it once and it worked fine. What about circuit breaker #12? I realized a few hours later, when I opened the refrigerator, that in fact it controls power to the refrigerator! I can’t exactly turn that off.

Could I replace the refrigerator with a newer one? I have two refrigerators. The small one in the garage is just a few years old and uses an average 40 watts based on its Energy Star label. The bigger kitchen one is from 2004 and seems to use 2-3 times that much. If I were to replace a refrigerator, it would be that one. But it works really well and would cost a lot to replace. I’m going to wait. (4)

The only other thing that we use a lot that draws a lot of energy are the kitchen lights. It’s a set of three weird fixtures with several kinds of bulbs. 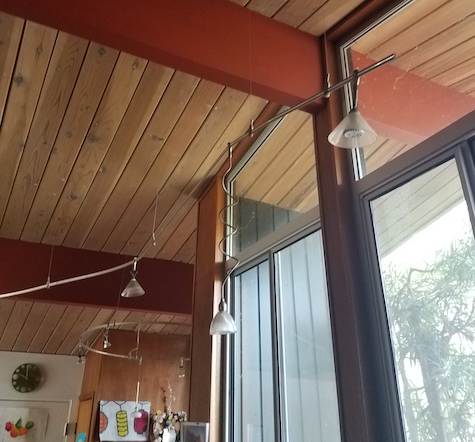 Three light fixtures in the kitchen have around 20 halogen bulbs, only a few of which are LED.

I’ve started replacing them with LEDs as they burn out, but there are many halogens left. How much power does it use? I measured the wheel rotation with and without the lights on and saw one fixture using around 200 watts and all three using over 600 watts (!!). We very often have at least one of the light fixtures on, so I bit the bullet and bought LED replacements for all the bulbs. It cost around $80 to buy the replacement bulbs (5). If I save 1 kWh each day, then at $0.19/kWh it will take about 1.5 years to pay that off. I’m okay with that.

We also have some lights in the family room that are pretty bright, though I’m not sure there is a bulb that will fit. I’ll take a look. Besides that, savings would likely come from the dryer, the oven, or the EV. Drying less and driving less don’t seem likely. (We already bike a lot.) I can probably preheat the oven closer to when I’m going to use it. Mainly, I’ll see how far the bulb replacements and dishwasher setting get me.

So, after all that, what is my advice for you?

1. Look at your meter. It’s kind of fun. All you need to do is time one rotation in seconds, then divide 25920 by it to find out how much power is being used. (This assumes you have a 7.2 Kh meter, which most of us do.)

2. Look in the early morning before anyone is up. This is your baseline load. Is it what you’d expect?

3. Look during a “normal” time of the day. Working from home means you are using electricity differently than last year. Are there changes you can make?

4. Nights are getting longer. Test the lights you use most often. Do they move the wheel a lot? LEDs are available now for many kinds of bulbs. Be careful of the size, though, since some LEDs are a little bigger.

5. Pay attention to the few big-time energy hogs. In our house it’s the EV charger, the electric dryer, and the oven. Can you use them less?

6. Don’t trust the labels on your electric panel!

This might be a fun project to involve kids in, too. Can they guess which are the energy hogs?

3. I confirmed early one morning that nights seemed to use about 300 watts.

4. This is a case where I think it’s fair to fall back on using carbon offsets.

5. The kitchen lights use GY 6.35 and MR 16. The oven hood uses a different kind of MR 16. The dining room light has G9 bulbs. The wall lights have R7S’s. It’s nuts. But at least the bulbs are available now.

6. Silicon Valley Power has a good reference for electricity use for typical appliances.

I included this graphic last time, but I want to include it again because I think it’s important. Sometimes readers ask how much of a difference the pandemic has made in our emissions. You can see the projected pre-covid emissions and the projections now, which are somewhat better. You can also see where we are relative to the Paris targets, and where we need to be to stay below 1.5C or 2.0C. 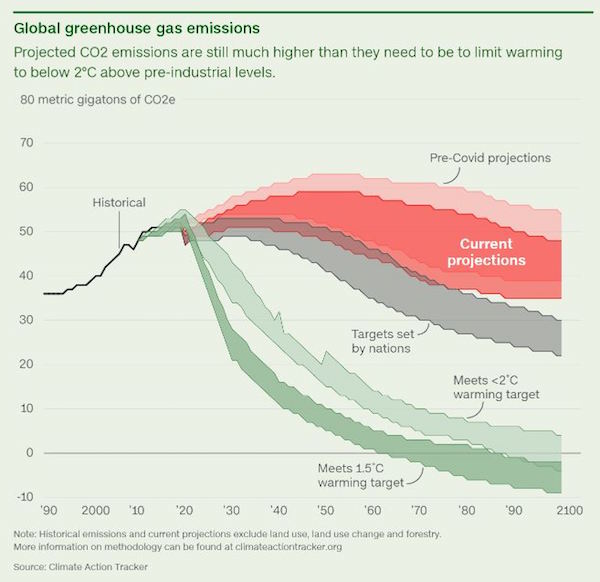 Our emissions reductions lag far, far behind where we need to be. (Source: CNN, 2020)

Comment Guidelines
I hope that your contributions will be an important part of this blog. To keep the discussion productive, please adhere to these guidelines or your comment may be moderated:
– Avoid disrespectful, disparaging, snide, angry, or ad hominem comments.
– Stay fact-based and refer to reputable sources.
– Stay on topic.
– In general, maintain this as a welcoming space for all readers.

It’s Time for Electric Utilities to Reinvent Their Customer Relationships