ABB has entered into an agreement with Norway’s largest grocery wholesaler ASKO, and its owner NorgesGruppen, to supply charging infrastructure for its growing fleet of electric trucks. Currently, ASKO has 600 trucks on the road each day and has a goal to achieve zero emissions distribution of groceries by 2026. Financial details were not disclosed.

ABB will assist ASKO with efficient and reliable charging infrastructure for battery-electric trucks at distribution centers throughout the country. The first ABB HVC 150C (150 kW) high power chargers are already in operation at ASKO’s distribution center in Oslo. Initially, they are charging two battery electric Scania trucks, with more to follow.

Overall flexibility and efficiency will be key for the solutions to work seamlessly alongside other demands on the electrical infrastructure.

We focus on solutions that take into account other activities such as charging electric pallet trucks, refrigeration systems and solar cells at the distribution centers in order to avoid power peaks, prediction of charging needs and optimization of the charging processes, for example in connection with loading of goods.

ASKO has been a pioneer in zero-emission trucks in Norway. It started in Oslo in 2016 with a rebuilt truck from the Netherlands with a payload of five and a half metric tons. At the beginning of 2020, it put into operation four hydrogen-powered Scania trucks in Trondheim with a gross weight of 26 metric tons and a range of 500 kilometers.

Then followed the above-mentioned battery electric Scania trucks in the capital with payloads of around 10 metric tons and a stated range up to 120 km. ASKO has ordered a total of 55 such Scania trucks, and was the country’s first to order 10 Tesla Semi trucks. The latter will have a payload of 36,000 kilograms and range up to 800 kilometers. 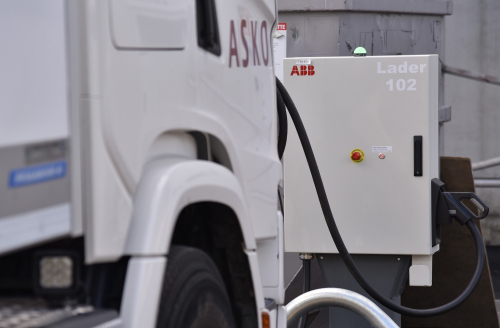 ABB is a world leader in electric vehicle infrastructure, offering the full range of charging and electrification solutions for electric cars, electric and hybrid buses as well as for ships and railways. ABB entered the EV-charging market back in 2010, and today has sold more than 14,000 ABB DC fast chargers across over 80 countries. ABB recently received the Global E-mobility Leader 2019 award for its role in supporting the international adoption of sustainable transport solutions.